Gangsters and Thugs, Criminals and Hoods

I've been doing some reading for a project and came across a reference to the Korean mafia. Can you give us a little primer on them? What makes them different from other organized crime syndicates? Their history? What types of services they provide? How they are structured? How they are seen by the Korean society? How influential they are in contemporary Korean politics? how, and if, they operate trans-nationally (especially in Southeast Asia)?

First, let the Korean direct you to Curtis Milhaupt's The Dark Side of Private Ordering: An Institutional and Empirical Analysis of Organized Crime. (If you have LexisNexis, the citation is 67 U. Chi. L. Rev. 41.) It is the most excellent article that the Korean has ever read about organized crime.

Milhaupt mainly discusses Yakuza, or the Japanese mafia, and his big idea is this: "The activities of organized criminal firms closely track inefficiencies in formal legal structures, including both inefficient substantive laws and a state-induced shortage of legal professionals and other rights-enforcement agents." In plain English, it means that organized crime syndicates do not randomly choose their illegal enterprises; they in fact choose enterprises that deal with inefficiency in the market created by the law.

(The Korean's favorite part of the article: "Identifying members of Japanese organized criminal firms is not difficult. ... As Joseph Castellano (the son of reputed mob boss Paul Castellano) put it, "What is a Gambino crime family? . . . Does this Gambino crime family have an office? Does the office have a plaque on the door that says, 'Gambino crime family'?" In Japan, the answers would be, in reverse order, "yes," "yes," and "read our rules and creed.")

As a quick example in the U.S., take an illegal gambling/bookmaking operation. There is a market demand for gambling, but the supply is legally prohibited in most states. Therefore, we have an inefficient market in which the demand far outstrips the supply. Organized crime syndicates fill this gap, provide the extra supply and bring the market to an equilibrium.

So there is the answer for your first question. What is the difference between Korean and other country's mafias? Nothing. Cross-national studies of organized crime have shown that all criminal syndicates show remarkable similarities, even down to the terms they use. Cosa Nostra referred to their cut (i.e. protection tax) from merchants as "wetting the beak"; Triad refers to it as "dipping into the fragrant oil."

So, like any other criminal syndicates, Korean mafias operate in areas where there are legally created market inefficiencies. Those areas are generally loan sharking, prostitution, illegal gambling, smuggling (drugs or other contrabands), and so on. They are often seen extorting protection money from street vendors, since street vendors are usually illegal and the police wouldn't do much if the vendors' property were damaged. They are also known to be heavily involved in construction industry, because 1. getting bids for construction often involves bribery on all levels, which is the kinds of services that organized crime provides, i.e. loan sharking and prostitution, and 2. it also involves very large amounts of loans, often secured by using body parts as collateral. Korean mafias certainly have networks outside of Korea, especially in China and Southeast Asia through which most illegal trades (of women and goods) occur.

Korean mafias are sometimes involved in politics. In the 60s, they were often hired by the dictator government in order to break up the opposition party meetings and conventions. Imagine George W. Bush hiring Cosa Nostra, Crips and Bloods to break up Democratic National Convention, beating the crap out of Hilary Clinton and Barack Obama! That's exactly what happened in Korea in the 60s. (Maybe that's what this country needs to jolt people into consciousness -- Americans tend to take their democracy for granted.)

Now that democracy has taken hold in Korea, mafia involvement in politics is more or less limited to working as an independent contractor for government projects that require violence. Such projects are usually forcibly driving people out of their homes and business in order to make way for a new public project. Gangsters were widely used during the 1988 Seoul Olympics to remove street vendors, who were considered unsightly for the foreign visitors. (The Korean has no idea how the preparation for 2008 Beijing Olympics is going on, but he would not be surprised if things were very similar.) Most recently, thugs were seen beating the crap out of people who were living/doing business around CheongGye-Cheon, a covered stream in downtown Seoul that Seoul's mayor decided to restore for aesthetic purposes.

(Incidentally, the Korean felt very torn about the CheongGye-Cheon Project. On one hand, many poor people were driven out forcibly, without any consideration for their livelihood; on the other hand, Seoul desperately needed greenery and people of Seoul simply love the place. Here are two pictures. You be the judge. Top: Street vendors like the man in the photo were concentrated in the old CheongGye-Cheon area. Bottom: The restored CheongGye-Cheon, decorated with lights.) 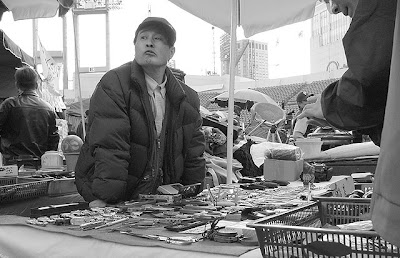 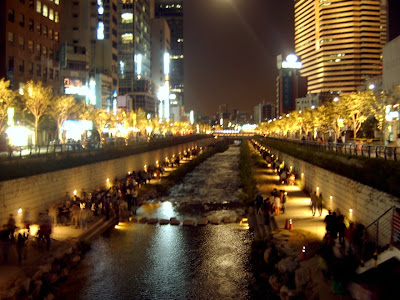 But truth be told, organized crime in Korea is not very influential compared to Yakuza or Triad. The history of organized crime in Korea is short and there never was any famed empire such as the Gambino crime family. There never was such a huge market inefficiency (e.g. drugs in the U.S.) that made criminal syndicates incredibly wealthy and influential. The guns regulation in Korea is extremely strict, putting a limit onto the physical damage that any group of thugs may inflict. (In fact, not only is possession of guns in Korea illegal, but also possesssion of a knife/sword whose blade is longer than 15 cm, or about 6 inches, is illegal without a permit. It's one of the things that the Korean likes about Korea more than America.) Aside from the areas of operation mentioned above, an average Korean would never deal with anyone from a criminal syndicate for the duration of his or her life.

Of course, pop culture operates on denying reality, so recently there is a deluge of Ko

rean movies dealing with lives of gangsters, beginning with a mega-hit Chin-Gu ("Friends"). The Korean recommended Chin-Gu if you are curious about getting a glimpse of lives of Korean thugs. It's a good movie. Perhaps the biggest influence of Korean organized crime is striking the inspiration of good film makers. But then again, that's the same everywhere, attested by The Godfather and Infernal Affairs.

(An aside: if The Departed wins any Academy Award, the Korean will pour some raging shitstorm upon Academy of Motion Picture Arts and Sciences. Scorsese can add the most minimal garnish on Infernal Affairs and walk away with the Oscar that Andy Lau deserves? Hollywood is such bullshit.)

-ADDENDUM: 02/05/2007 10: 30 p.m.- According to today's news, organized crime of Korea has deeply infiltrated into the entertainment industry. Popular actor Kwon Sang-Woo has filed charges against Kim Tae-Chon, a well-known criminal syndicate boss, for extorting Kwon to hold a tour in Japan. In addition, apprently Kwon's manager formerly belonged to an organized criminal syndicate, and also extorted Kwon to gain exclusive management rights for two years. Of course, organized crime in the entertainment industry is nothing new, and again same across all countries.