Help! I need a recommendation on people/show/clips or anything in Korean that can counter all the Fox News parroting Korean news that my mom watches all the time on YouTube. If they’re a Christian, that would be a bonus since most of the videos she watches are sent by church people and thus she thinks are truth.

I'm sorry to say I can't be very helpful. If I knew the solution, I would be consulting political parties around the world how to unscrew the people's minds warped by the conservative online media, which is more of a systemized disinformation campaign rather than journalism. To be sure, there are good and popular liberal Youtube channels and podcasts that cover Korean news. (Allileo by Yu Si-min comes to mind.) But it would be pointless to recommend them, because your parents will never watch those commie channels. The problem is not the lack of good and rigorous material; the problem is the deliberate refusal to seek the truth.

I am writing this post primarily in order to let the world know that your problem is very common among younger Korean Americans. Virtually every day, I receive emails from people in your exact situation - asking for resource on how to reverse the brain damage caused by our parents' destructive Youtube habit. The rotting of our parents' minds in fact began much earlier, because Korea faced the problem of the conservatives' institutionalized disinformation campaign earlier than the United States. Before any American could contemplate the possibility of Russians putting up fake Facebook posts to sway US voters, the conservative Lee Myung-bak administration from 2007 to 2012 was using Korea's spy agency to run a domestic psy op generating millions of message board replies and fake tweets. Among older Koreans, it is an accepted truth that President Moon Jae-in secretly hoarded a 1,000 tons of gold (to a point that an armed robber attacked Moon's office before he was the president, looking for the gold) and North Korea has 1,620 tanks hidden under Seoul through an elaborate network of tunnels.

The issue became much more visible recently as the disinformation campaign went international. A few years ago, I was bewildered that second generation Korean Americans, whose politics in the US was firmly within the mainstream, began parroting some wild-ass talking points about Korean politics - then I realized they were getting all the Korean politics news from their parents who were undergoing the brain rot. But in the past year or so, the second generation Korean Americans began noticing that something was off: even if they knew nothing about Korean politics, they could tell something was wrong their parents started saying COVID-19 was not real. This issue became more visible to the younger Korean Americans because South Korea's conservative Youtube channels would pick up the bullshit from US conservative media, such that the parents started spouting a more recognizable form of bullshit. 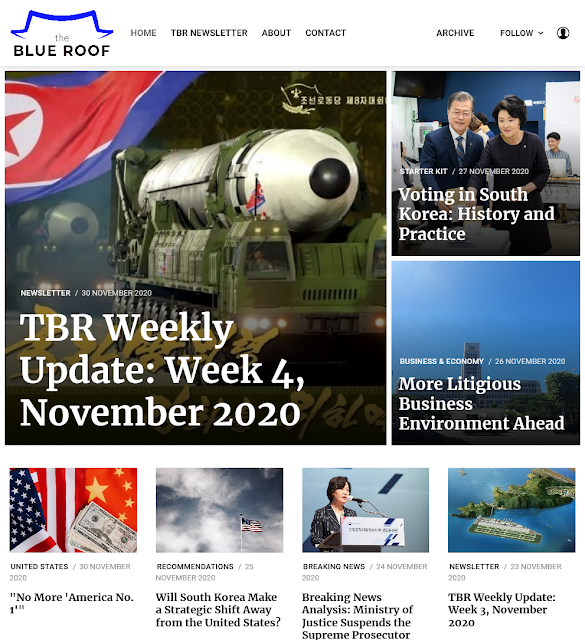 After getting hundreds of questions and requests similar to Rim's, I did come up with one response: with a team of like-minded people, I started a website/newsletter that focused on South Korean politics. If you follow me on Twitter (@askakorean), you probably already know about The Blue Roof: www.blueroofpolitics.com. We started TBR for many reasons, but speaking for myself, one of the major reasons was because there needed to be some kind of a resource for Korean Americans who are dealing with their parents' Youtube habits. I have no grand hope that this will be the silver bullet; your parents likely will not be persuaded to read TBR's coverage of South Korean politics. But at the very least, you can have some frame of reference with which to gauge how far off course your parents have gone.

Again, I am sorry I cannot do more for this truly serious problem. But I can guarantee that our team at TBR is producing a high quality publication. The site only three months old, but we count among our subscribers virtually every international media outlets with a presence in Korea as well as many diplomats and academics. And atoning for my sin of very infrequent posting on this blog, I am committed to producing TBR every week without fail. It might not get your parents off the right-wing Youtube channels, but at least you will now be able to hold a conversation with them.