Homefront: Too Scared to Offend China

I just wanted to share with you a concern I have about a particular video game I played, called Homefront. . It's basically an alternative view of reality where North Korea unified both North and South when Kim Jong-Il died and his son took over. The thing that concerns me is its portrayal of North and South Korea. It sort of views South Koreans as some sort of evil people capable of overtaking the world or something. I wouldn't think that South Korea would even think about harming an American citizen, much less agree to harming Americans as a whole. I think as part Korean, I'm a bit offended by this game and its message, but I wanted to ask you what you think? My view and thoughts of South Korean is that that they don't want nothing but the best for Americans and I'm a bit surprised that the developers of this game would think that they would take a different stance.


The short answer is: the Korean does not think much about the game at all. This is a good place where one of the Korean's life principles works very well -- that is, "worry about what reasonable people think, and forget about what unreasonable people think." No reasonable person would let this affect his/her perception of the actual nation of Korea. Besides, even within the game's setup, South Korea is portrayed as overtaken by North Korea anyway. Let's not worry about things that do not matter. 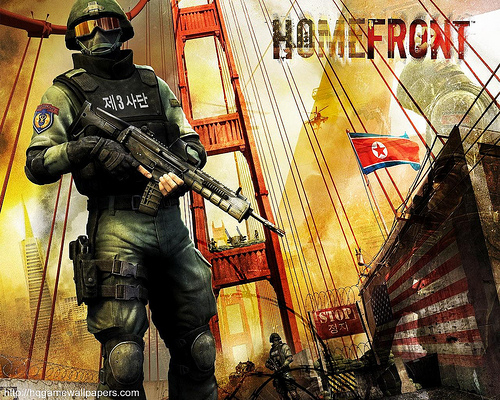 (Source)
The only thing that the Korean might find offensive about Homefront is the highly likely possibility of totally butchered Korean language in the game, but that's just him and his own peculiarities. First person shooter is not the Korean's game, so he won't be finding it out at any rate.

A few notes about Homefront:

- As expected, this game created a small controversy in Korea, especially because an executive of the game company THQ said, through its sinking of ROKS Cheonan, North Korea had been "really cooperative" in selling the game's world, and he "really appreciate[d] the regime in North Korea for supporting Homefront the way they have." Obviously he was joking, but it is still pretty tone-deaf to joke about an attack that killed 46 people less than five months previous.
- The game is currently banned from Korea, but not because of the reason you are thinking. It is not selling in Korea because it was never submitted to the Game Rating Board of Korea to receive a rating. Of course, the Korean thinks there is a solid chance that it would not receive a good rating (say, 13-years-old and up so that it could sell more) even if the game is submitted, but that's just speculation.
- Is Homefront even remotely possible? The game's plot works mightily toward creating a shred of plausibility, but it is pretty laughable to anyone who knows anything about North Korea. Right now, North Korea would not even be able to handle South Korea even if South Korea voluntarily submitted itself to North Korean rule. Also, apparently the decline of America through dramatically reduced supply of oil is a big factor in Homefront. This is doubly stupid because (1) South Korea depends on foreign petroleum to a much, much greater degree than the U.S. (as South Korea imports 100 percent of its fuel,) and (2) South Korea's economy is hugely dependent on its export to the U.S.
Got a question or a comment for the Korean? Email away at askakorean@gmail.com.
Posted by T.K. (Ask a Korean!) at 11:37 PM