Read This, Fans of The Departed, and Learn the Truth.

At the end of a previous post, the Korean promised that he would pour down some raging shitstorm upon Academy of Motion Pictures and Sciences if The Departed wins any Oscar. Well, The Departed won 4, so here is the shitstorm, as promised.

Here is the simple reason why any Academy won by The Departed is bullshit. The Departed is based on a Hong Kong movie released in 2002, called Infernal Affairs. And by "is based on", the Korean means that "plagiarized down to every relevant detail." 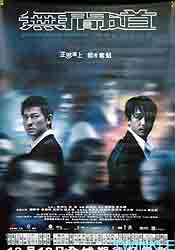 But it goes beyond that simple fact. This is really about what the Academy sees its award show as. Once upon a time, American movies ruled the world. They still do to a certain extent, but certainly not to the same degree. Just like other American inventions of baseball and basketball, the world has caught up with America, and fantastic movies are made outside of U.S. every year.

At this point, the Academy had to choose. Will it continue favoring American movies and try to select the best picture among them, or will it open up its doors to foreign films and try to award the true world champion? If the Academy cares about the global reputation of Oscars, the answer is obvious. And by and large, the Academy made the right moves, making this Oscars the most international one ever. Pan's Labyrinth, a Spanish film, won 3 Oscars, next highest to The Departed. All these were encouraging signs. But by showering The Departed with 4 Oscars, including Best Film, Best Director, Best Screenplay, and Best Editing, the Academy took two steps back for every step it had taken forward. Instead of awarding the true global best, the Academy coronated its knockoff.

The Korean has no doubt that Martin Scorsese is a great director. In fact, the Korean believes that Scorsese, with The Aviator, should have won over Clint Eastwood's Million Dollar Baby in 2005. But even the greatest director is capable of mailing it in, and mailing in Scorsese did.

But the Korean still had hope, going to watch The Departed. After all, it’s Martin Scorsese, for crying out loud. He’s the guy who made Goodfellas! Sitting through The Departed, the Korean desperately hoped for something different to show. And there were a few differences between Infernal Affairs and The Departed. (Read on, there are no spoilers.) They were:

That’s it. Seriously, those are all. Which one of those 5 points screams “major changes”? On the other hand, so many of the major storytelling/stylistic points were directly lifted from Infernal Affairs to The Departed. (Okay, now we have spoilers.) Such as:

1. Making the two moles look alike.
2. The way the two moles almost meet, at the theatre.
3. The way the deal was bugged (computer chip replaces drugs.)
4. The way the chief dies.
5. The way there were two moles each in the end, and the way they become known.
6. The usage of glasses and blinds in the police HQ.
7. The setting and camera works on the roof, the movie’s climax.

The Korean can go on, but here is the point: The Departed is no more than a shameless knockoff of Infernal Affairs. If Scorsese did not bribe Andy Lau and Alex Mak into making this movie, he would certainly lose the lawsuit for plagiarism.

Now, a question must be asked: Why couldn’t Infernal Affairs simply open in the theatres of America, and make The Departed, which would open in mere 4 years later, appear utterly unimaginative?

Answer: Read the differences points 1 and 2 above. The Korean hates playing the race card, but really there cannot be any other explanation. Infernal Affairs, by all accounts a spectacular movie (reflected by the success of its knockoff,) got robbed BECAUSE IT DOES NOT HAVE WHITE PEOPLE IN IT. The same thing happened with The Ring and The Grudge. Only Asian movies that escaped this fate are the martial-arts based ones, i.e. the ilk of Crouching Tiger, Hidden Dragon, because it would be completely ridiculous to have those movies set in ancient Boston and have Chuck Norris flying across the screen.

What drives the Korean completely insane is the thought process behind the decisions to remake Asian movies. “Surely Asians can do some things that white people can’t, but those things cannot possibly include being an undercover cop that tests your inner goodness!!” Never mind that the movie won 23 different awards all over the world, and was wildly successful in cultures and languages that are as radically different as China, Japan, and Korea!

But it's not just about the assumption about Asian movies; it's also about the assumption that American audience is stupid. “There is no way in hell American audience is receptive to the emotions of fear, love, ambition and redemption portrayed by these yellow-skinned, slant-eyed chinks. We had better slap together a cast of white actors and a white director so that they may properly translate to the Americans whatever these chinks are trying to show.”

If you are an American movie lover, you should be insulted.

p.s. The best part? When The Departed won the Best Screenplay and the screen writers (more like translators) walked up toward the stage, the PA system announced "The Departed was based on a Japanese movie, Infernal Affairs." That made the Korean jump out of the couch and scream, "IT'S NOT JAPANESE YOU IGNORANT FUCKS!!!"

The Korean has been a little bit harsh on the Japanese, especially with the recent Korea-Japan relation series, but he would like the readers to know that he was pulling for Rinko Kikuchi for Best Supporting Actress. The Korean also likes Japanese movies and cartoons.
Posted by The Korean at 8:01 PM