I have been trying to lose weight. I have lost some, but I am down to the last ten pounds, and can not seem to dispel the weight. Most of the weight loss information I obtain seems to be wrong, so I need a new perspective. I thought viewing weight loss through another culture's view point might help me. How can Korean diet help lose weight?


Given that weight loss is always high on the list of new year's resolutions, the Korean figured this is a good question to open up the new year. Can Korean diet help you lose weight? Allow the Korean to put it this way:  Korea is the thinnest country in the developed world, while America is the fattest. As of 2009, only 3.5% of Koreans over the age of 15 was obese. The same number in America was an astounding 34.3%. Obviously, there are reasons other than diet that Koreans are slimmer than Americans. (For one, ready availability of public transportation in most cities, leading to more walking. Genetics, for another.) But it should be equally obvious that Korean diet and eating habits have a great deal to do with the svelte figures of Koreans.

With that said, let's get right to it. How can you lose weight like a Korean?

If you must only take away one point from this post, take away this point:  Koreans are slim because they eat less. Forget all those gimmicky diets for a minute, and focus on the obvious -- if you eat a lot, of course you will gain weight! As long as you lower the caloric intake enough, you can lose weight while eating nothing but Twinkies and powdered doughnuts.

Here is an alarming observation. Based on the Korean's experience, American portions are between 50 to 100% larger than Korean portions. This is particularly egregious at restaurants. The Korean is not small at all -- he is 6' 1", 195 pounds. Yet he can comfortably split, say, one order of fried rice from a nearby Chinese food into a full lunch and dinner. However, the Korean sees plenty of people around him in the restaurant, finishing the entire order in one sitting.


Just think about this -- for every meal, Americans eat as much as double the amount of food that Koreans eat. How could you possibly not get fat with that much food? Don't be deceived by "one order" of food in America -- nobody needs to eat that much. Split one order into two meals. Or if that is still too much temptation, immediately throw away half of the food that you ordered. The Korean absolutely hates wasting food as much as you do, but consider it as a price to pay to lose weight. Or better yet, do what Koreans do and . . .

If you cook at home, you can control the portion, adjust the level of unhealthy elements in food, and avoid the delicious but unhealthy things with which restaurants and processed food companies cram their food. As the Korean said earlier, Koreans' eating habits are changing, and fewer Koreans eat home-cooked meals. But it has been the Korean's experience that Koreans eat at home more frequently.

To be fair, the fact that Koreans are more likely to eat home-cooked meal is not completely positive, because it is women who are staying home to cook. But as far as health and weight loss is concerned, there should be no question that home-cooked meals are better.

For this point, a picture will be better than a thousand words. A little bit of background is necessary here. The Korean Parents visited the Korean's house in the winter of 2010, and the Korean Mother prepared a party meal for the Korean In-Laws and some friends. This is what the prepared table looked like: 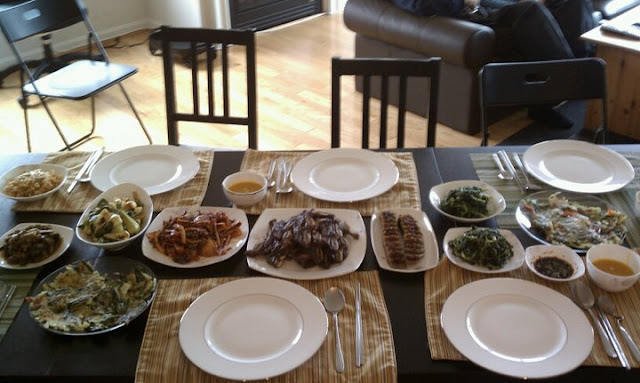 First, notice the portion size. It may not look like much, but this much food plus a bowl of rice for each person fed eight fully grown adults. Second, notice what kind of food was being served. The Korean made it easy in the next picture. Red square is for meat, blue hexagon is for seafood, and green circles are for vegetables. 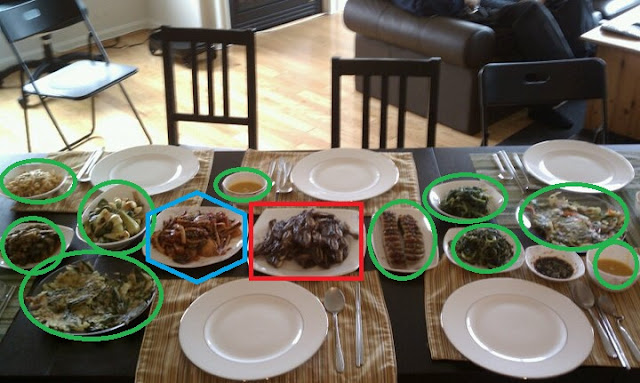 Just look at the amount of vegetable involved at a party table. Volume-wise, the Korean would say at least 80% of the total food served was vegetables. Compare this to, say, a typical Thanksgiving dinner, where the massive turkey is the highlight of the meal. (And even the vegetables involved in a Thanksgiving meal is soaked in butter and/or sugar.) Note that this party table is not anything special, but just a larger version of an everyday Korean meal, which is comprised of a bowl of rice, some soup, and a few side dishes. And the vast majority of such side dishes are vegetables.

(Aside: Here is another reason why the Korean hates David Chang -- he apparently "had no idea there were such endless varieties of namul," or vegetable side dishes, until he visited Korea recently. Namul is the backbone of any Korean cuisine! What a fraud.)

Here is another defining characteristic of Korean cuisine -- it uses tons of spices and condiments. In fact, some of the spices and condiments are themselves a complicated dish. For example, this is how to make bean paste (doenjang 된장):  boil beans, grind the boiled beans into pulp, shape the ground beans into large chunks, dry the chunks in a warm room, hang the chunks in the sun for a few months, soak the chunks in water for a month, then add salt and ferment for a few months. All this, for just one condiment!

The result of using so many spices and condiments is that although Korean food utilizes mostly simple, vegetable-based ingredients, the finished dish (when done correctly) ends up having a complicated, layered flavor profile. And this is what makes Korean vegetable dishes not just delicious, but addictive. This is especially true with kimchi, probably the most complex Korean vegetable dish. (One Washington Post food writer called kimchi "cabbage crack," although regrettably she got her start with a recipe from David Chang. Gaah!)

Okay then, just what are you supposed to cook and eat? The Korean will get to that in the next post in the series.

Got a question or a comment for the Korean? Email away at askakorean@gmail.com.
Posted by T.K. (Ask a Korean!) at 10:10 PM