Ask a Korean! News: Please Don't Do This

The Korean was going to let this one slide. But now that the news climbed all the way to third place in most-read Naver.com articles, it is a notable news.

This picture will save the Korean a thousand words: 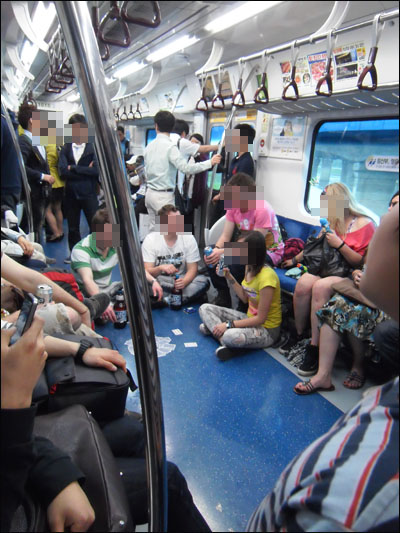 (Source)
Yes, this is a crowded subway in Seoul. And these people are sitting down on the floor, playing cards, and drinking beer. The person who took this photo asked them to get up. Most of them complied, but one kept arguing all the way until he got off the subway. And now this is national news in Korea.

If you think this is not self-evidently stupid, please leave this blog.

There is no way to tell where these idiots come from, but "America" would be a decent bet. Even if they are not, this gem of a passage from Ask a Frenchman! applies to everyone who visits Korea:


Why is it Americans students (even a minority) that always behave stupidly in public places though is still a mystery to me. ... for some Americans, abroad, especially Paris, is some sort of Neverland where nothing is real and everything is designed for their own entertainment, as if the US was an island floating on a planet-wide Disneyland.

The Korean was joking when he told the BusanHaps Magazine that he would get rid of all these damn furriners if he were elected the president of Korea. But these are the moments that inspire those jokes. This is stupid, stupid, stupid, stupid and stupid some more. And it makes absolutely no sense that these things keep happening in Korea like a fucking clockwork. Please, PLEASE stop doing such stupid things. If you see another foreigner in Korea acting like an idiot, stop them too.

1. A lot of people seem to need a refresher course on how not to be an arrogant American:


Do as the best Koreans do, not as any Koreans do. One of the most common misguided complaint by an expat in Korea is: "Koreans do it too! Why can't I do it?" For example, there are plenty of Korean young men who get plastered on weekends, yell and pass out in the middle of the street. But that is not an excuse for you to do the same. Like it or not, for every negative action, you will be judged more harshly than Koreans who engaged in the same negative action. That's what it is like to live as a minority and an outsider. Your fellow Americans of color have been dealing with the same thing for years and years. Remember that, during Hurricane Katrina, black people "looted" food while white people "found" food? It is not fair, but it is to be expected.

And yes, the same applies to Canadians, Aussies, Kiwis, or any foreigner in Korea. The original post made that quite clear, so stop with the bellyaching.

2. A lot of people also need to get off the high horse about this being the prime example of Korea's racism. Sure, there are some elements of Korea's racism identifiable in this story. But if you want to talk about Korea's racism, there are better topics than this. Like when mixed-race children in Korea receive inadequate education. Or when a marriage immigrant was murdered by her husband. Or when a foreigner actor receives death threats just because he filmed movies exposing the ugly side of the way Korea treats its migrant laborers. (And guess what? This blog covered all of those events.) A bunch of entitled white kids making an ass out of themselves in the subway is NOT the situation where you want to make a stand about Korea's racism. (That's right, the Korean said it -- let the thousand hate comments spew!)

3. If you think Korean media makes a big deal out of everything involving a foreigner, you are wrong. Koreans may overreact to foreigners doing bad things, but they nonetheless maintain a relative measure of perspective. Here are some of the recent events involving foreigners that never became a national news, only a blip in the local news: GI refused to pay cab fare and beat up the cab driver instead; a foreign lecturer at Jeonnam University assaulted a person, seriously injuring him, and pulled a runner instead of standing trial; a foreign vessel ran after colliding into and destroying a fishery. None of these became a major news story in Korea. Why? Because as bad as these events are, these things happen. People get into fights, ships run into things. They are not supposed to, but people are not surprised at them because those things happen all the time. A group of people sitting down in a crowded subway, drinking and playing cards? That level of stupidity does not happen all the time.

The only thing to do here is to call these idiots idiots, and move on. Don't think you are immunizing yourself by saying something like "Not defending these idiots, but." No but here is necessary.

Got a question or a comment for the Korean? Email away at askakorean@gmail.com.
Posted by T.K. (Ask a Korean!) at 9:41 PM