Is Pizza in Korea a Xenophobic Conspiracy?

My question is related to food. Don't remember where I saw once that it was said that koreans used to "bastardize" the world food. One classic example is pizza, where all kinds of ingredients are put together, with no particular reason or logic. So my question is: Do koreans simply change the international dishes to adapt them to the local taste or is there anything else going on there, e.g., "let's make sure we change it, so we show that we don't swallow what comes from overseas"? And, in the sequence, a more specific question would be: why they have sweet potato in the classy mozzarella pizza???

Thanks and looking forward to your comments on this. And, please, keep it up with the great blog.

You are thinking too hard. Not everything (and actually, only a few things) Koreans do is based on some inscrutable xenophobia. Koreans are changing non-Korean dishes to suit their taste, and that is all. 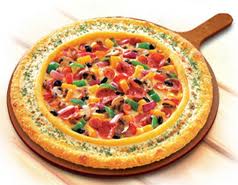 "Rich Gold Pizza" from Pizza Hut Korea, whose defining
characteristic is a ring of sweet potatoes along the edge.
(Source)
The pizza in Korea is one of the most common complaints that the Korean sees from the expat community in Korea. In fact, there might be more revulsion toward pizza with sweet potatoes and corn than toward dog meat. The Korean is actually pretty understanding of that complaint. (The Korean is not a fan of those kinds of pizzas either. Why would anyone eat pizza in Korea at any rate?) If there is one food in America that unites the thoroughly diverse childhood memories of Americans, it is pizza. There is a great deal of emotional attachment to the dish, and it is pretty understandable for an American to fly off the handle a bit when it appears in an alien form.
Actually, the Korean recently had an equivalent experience. Near the Korean's office, there is a "Korean" place that sells "bibimbap." The words are in quotes because the place is not really Korean nor does it really sell bibimbap. It instead has a bar reminiscent of that from a Subway sandwich store, and people can choose various different kinds of starch, veggies, meat and sauce. As long as you choose the right things, the end result is kindasorta like a bibimbap. But what if you chose all the wrong things?
One day, there was a white dude standing in front of the Korean at that place. And the dude ordered for his bowl the following: brown rice, steamed broccoli, an ice cream scoop full of guacamole, topped with teriyaki chicken. Then the dude sat down, and proceeded to mix everything. And that sight seriously made the Korean close to vomiting. He is being absolutely serious; not one bit of exaggeration here. Just thinking about that sight is turning the Korean's stomach right now. The Korean had to get his food to-go; if he had stayed in the restaurant, he would have thrown down that bowl of abomination, grabbed the collars of the poor white dude (whose only crime was ordering what he liked) and screamed in his face: "What the hell is wrong with you? Have you given up trying to be a human? What you're eating is not human food!!!"
So here again, the lesson for the umpteenth time is: welcome to the life of living as a minority, Kung-Food Panda. When you are the minority, you are disenfranchised from protecting the food you love from the acts of horrible mutilation perpetrated by the mainstream. If the mainstream wants pizza with sweet potatoes and bibimbap with guacamole, the mainstream gets them -- and really, it is not like they are doing anything wrong. It sucks, I know, but you are better off getting used to it for the sake of your mental health. If he had his way, the Korean would have firebombed David Chang's Momofuckyou restaurants a hundred times over. But that's life as a minority.
Got a question or a comment for the Korean? Email away at askakorean@gmail.com.
Posted by T.K. (Ask a Korean!) at 10:33 PM