The Mysteries of Buffets and Koreans

Why do Korean people stay so long at buffets? Do you think we'll ever be like Caucasians and not try to maximize each dollar spent?

Although the way you phrased your question could have been better, the gist of the question is fascinating. The Korean knows of no study that measured average time of stay at a buffet, organized by ethnicities. But from anecdotal experience, the Korean is in broad agreement with John's observation -- that Korean Americans, on average, are more likely to try and maximize their dollars at a buffet. (The Korean does not agree, however, with John's implication that Korean Americans are somehow supposed to "be like Caucasians" or Caucasians do not try to maximize the dollar spent at a buffet.)

Why is this? The reason why John's question is fascinating is because they involve two fascinating social phenomena -- one is the "immigrant time warp," and the other is the "cultural capital and consumption".

The Korean already touched upon the immigrant time warp in this post. To summarize: "immigrant time warp" is a phenomenon in which immigrants tend to preserve their modes of thought and behavior of the country at the time when they emigrated. For example, suppose a Korean adult emigrated to the U.S. in the 1970s. That Korean adult, for the rest of her life, will think and behave more or less like Koreans of the 1970s. This is because she only receives a tiny trickle of American modes of thought, as she is facing language barrier and does not fully interact with mainstream Americans on a consistent basis. But more significantly, she will be cut off from the changes in modes of thoughts and behavior of Koreans back in Korea, because she is geographically away from the changes in Korean society that cause Koreans back in Korea to re-examine and change their modes of thought and behavior. It is as if she is caught in a time warp -- she becomes a walking time capsule of the value systems of Korea in the 1970s.

(Aside: The Korean is fully aware that, as a person who emigrated in 1997, he himself is becoming more susceptible to the immigrant time warp as his residence America grows longer. He tries to stave off the effect by closely reading the latest news, commentary and books from Korea and frequently traveling to Korea, but he cannot help but slip from time to time. If the Korean goes off the reservation because he cannot stop the effects of immigration time warp, that will have to be the end of this blog.)

So here is the first point -- when one sees a Korean American who takes his sweet time at a buffet, the Korean will bet heavily that the particular Korean American is an immigrant prior to mid-1990s. And the Korean can personally testify that this was true:  Koreans absolutely destroyed any buffet offered to them, and the trend only ended around mid-1990s. The most stunning visual evidence to this is the infamous salad towers. It is right now prevalent in China, and here is a great picture of one. 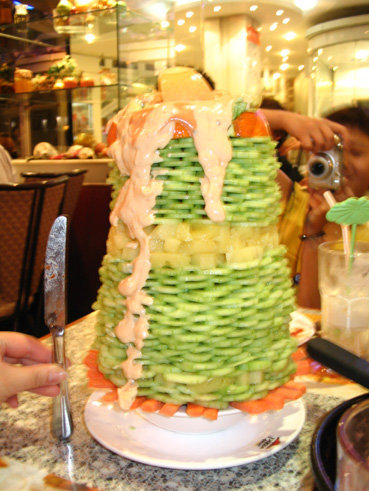 Salad tower from Pizza Hut in China.
Exact same thing used to happen in Pizza Huts in Korea.
Click the source for the step-by-step instruction
of how to build this masterpiece
(Source)
Because Koreans used to stay and milk the buffet salad bar, Pizza Huts in Korea used to limit the trip to salad bar to one time. But when the rules get in the way of what people want, human ingenuity can always find a way -- the result is a salad tower. The Korean used to be very good at this also, when he was a strapping young buck who would eat nine full meals a day with snacks in between. His salad tower height record was probably about two feet.

But the mystery still remains:  what is it about Koreans of their era (and contemporary Chinese) that compels them to stay long at buffet? This question becomes even more mysterious when one recalls that the answer is not "poverty" -- Koreans did not lack for food by 1980s, and contemporary Chinese (or at least, those Chinese who can afford to eat at Pizza Hut in large cities,) do not lack for food either. This is where the second theory, cultural capital and consumption, comes in.


A quick definition first. "Cultural capital" is a concept coined by Pierre Bourdieu in 1984. While Bourdieu uses a lot of big words to explain this concept (as philosophers tend to do,) the core idea behind it is simple:  it is just the amount of "culture" one has, be it knowledge about music, manners and dispositions, overall education, etc. As applied to consumption, people with high cultural capital generally consume goods in a different manner from people with low cultural capital.
An excellent 1998 study by Douglas Holt tried to capture how cultural capital affect consumption patterns. He did this by essentially interviewing a number of people who can be categorized as "High Cultural Capital" (HCC) individuals and "Low Cultural Capital" individuals (LCC). The entire study is a fascinating read, but this particular passage jumps out:


Among LCCs, restaurants that serve buffet style are consensus favorites -- the contemporary American equivalent of the French working-class meals characterized by "plenty" and "freedom":

DAVID (LCC):  Well, generally when I go out to eat, I'm sitting there thinking, "If I was at home I could fix this, a bigger portion for a whole lot less money than what I'm paying here." It destroys the whole thing, because I'm thinking so much about how much ... they're making a bloody fortune off me for, you know ... where a buffet, you know, I'm in the driver's seat kind of you know. I know up front how much it's going to cost me and I can eat as much as I want. I go away hungry it's my fault, you know.

KATE (LCC):  Of late, we've been going over to Milroy for seafood. Every Friday night they have a buffet ... They have crab legs, shrimp, all kinds of fish deep fried, with clams that are deep fried. Along with ham, chicken, beef. You have your beverage and delicious homemade dessert and soft ice cream for $6.95 ... I wish you could see people eat those crab legs. They bring them out on trays and the minute they bring them to the salad bar, everyone rushes to get them.

RUTH (LCC):  At the Hotel Edison -- it's a family-style that has chicken, turkey, or ham that you can pick; there's filling, and there's lettuce with that, Jell-O salad, dessert, and coffee, all for like $10, you get all this food, as much as you want, they keep bringing it out, plus waffles. That's why it's his favorite thing to eat is to go there and have waffles.

Change "chicken" to "kimchi" and David, Kate and Ruth might as well be all Koreans.

At bottom, this is not very hard to understand. What characterizes HCC is prolonged affluence -- not the fact that you have money now, but the fact that your parents had money such that you grew up in a habit of spending money on various things. If you did not grow up spending money, your spending habit becomes set in a certain way. Even if you later come across money, you would spend it in a different manner from the way people who grew up spending money. (This principle is succinctly captured in the aphorism, "You can take a trailer trash out of the trailer, but you can't take the trailer out of the trailer trash," and other equally offensive variations.)

And here is the crucial consideration:  up to around late 1980s, entire Korea may have been fairly characterized as an LCC country. Consider the childhood years of Koreans who were in their 30s through 50s (i.e. those people who dictate the dynamics of a society) in the 1980s. Their childhood had two major wars -- World War II and Korean War -- looming in the background. Everyone was desperately poor. Starvation was not only a real possibility, but also a frequent occurrence for many Koreans all the way until mid 1970s. 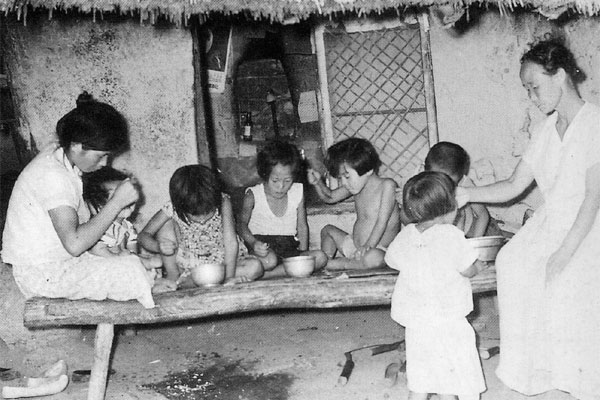 Jeollanam-do in the 1960s.
Recall that a proper Korean table involves a bowl of rice, soup, and several side dishes.
These children are eating out of a single bowl --
which likely means the parents had nothing else to serve.
These children became adults in the 1980s. Think about that.
(Source)
Because few Americans have been genuinely hungry growing up, few people in America understand this:  when you grew up starving, eating a lot becomes an obsession. This also contributed toward the strange trends in Korea's culinary fads dominated by different kinds of expensive protein (galbi or gwang'eo-hoe, for example) instead of cheap and healthy meals. Especially in the 1980s, the rate of heartburn and other gastrointestinal diseases among Korean adults was through the roof.

As Korea is settling into its current condition, things will change. In fact, things did change in Korea for the most part, as people began to focus more on overall health represented by the meals. But older Korean Americans, preserving their values in the immigrant time warp, will probably build a salad tower whenever they can.

Got a question or a comment for the Korean? Email away at askakorean@gmail.com.
Posted by T.K. (Ask a Korean!) at 10:13 PM