What does the Korean think about Yellow Fever?

Do you think there is a growing trend of white male/Asian female couplings? If so, could they possibly have stemmed from anything other than traditional notion of love? My personal view is that most of white male/Asian female coupling was heavily influenced by innate sense of inferiority that some Asians tend to display towards Caucasians and mass manipulation by the media. As a Korean male, what is your stance on this subject?

Your concern is valid to some extent. There is no denying that the media tends to fetishize Asian women, and some non-Asian men certainly gravitate toward Asian women in particular because of their image, rather than the women as persons. A litany of examples can be seen in the following article by Vickie Chang on OC Weekly:


By the time we've reached adulthood, most Asian American women have experienced so many episodes of Asiaphilia that it becomes something we laugh about over dinner. There was the time that one smooth-talking (and way too short—I hope you're reading this) guy from LA Weekly's marketing department asked me where I was from.

"No, really, where are you really from?"

There was the 20-year-old UCI economics major who swears that Asian women's vaginas "feel different somehow—very smooth and naturally lubricated." Or the guy who sauntered up to me and asked, "You must be great with a chopstick, huh?" Wink, wink.

It pisses us off—no, I don't want to see your killer Chinese-character tat; it probably doesn't mean what you think it means—but we're not sure what we can do but laugh.

"It's been happening so long I just let it roll off my back," Christina says. "I used to have a mouthful for every guy, but they'd just laugh at me and say, 'Oh, she's a feisty one!'"

The overwhelming ratio of males with Asiaphilic attraction to females suggests that this fetishization isn't based on looks alone. Asiaphiles are looking for authority in their romantic relationships, premeditated or not.

This issue moved out of the theoretical and into the personal when I dated a white boy I met in college.

"Ever visited the Japanese Garden at Huntington Library?"

"I have, but I prefer the Shakespeare Garden."

"Ever read The Art of War?"

I was devastated. Couldn't he see I was into the same things he was—Dostoevsky, early '90s shoegazer music and Indian food?

Yellow Fever: They got it bad, and that ain't good [OC Weekly]

The more messed up part is that some Asian American women explicitly refuse to date Asian American men based on superficial qualifications also, like this poor deluded soul:


You know you are really at the bottom of the heap when Tyra Bank serves as a voice of wisdom for you.
The examples that the Korean outlined above are clear displays of racism, almost in its purest form. These people make a pre-judgment that characterizes an entire race, and proceed to apply that racial pre-judgment to individuals. One can hardly think of a better definition of racism than that.
The Korean wishes he could say those examples are isolated, but they are not -- if you are an Asian American, you have all seen these types at least once or twice in your life. And it is deeply distressing that such blatant racism may carry on like this.
But at the same time, the Korean thinks that there are countervailing considerations about this topic that are not discussed as often. As much as the Korean despise the dumb racists, the entire thing needs to be put in context.
More after the jump.
Got a question or a comment for the Korean? Email away at askakorean@gmail.com.

The countervailing considerations are based on a simple recognition -- there are many, many Asian/non-Asian couples in the world, and it is not possible that all of them are motivated by racism of the kind discussed above. And it is deeply unfair if every Asian/non-Asian couple should receive a dirty look based on the idea that one or both of them is/are racist.
Consider the nature of attraction and love. We all have our "types" of what we want in our romantic interest, and for the most part, having a certain type is not a conscious process. We generally tend to develop our types through influences that we do not even realize at the time when our types are being developed. And when we go look for our romantic interest, it is not as if we jot down our types on a checklist and automatically eliminate those people who do not meet the criteria.

For example, after about 15 years of women-gazing, the Korean realized that he consistently turned his head for tall women. (And sure enough, the Korean Wife is 5' 9".) How the Korean developed this preference is a total mystery. All he knows is that whenever he was looking to speak to a group of women of roughly equal attractiveness, he always gravitated toward the tallest one. (One side effect of this was that it made the WNBA surprisingly watchable for the Korean, especially when Candace Parker is playing.) 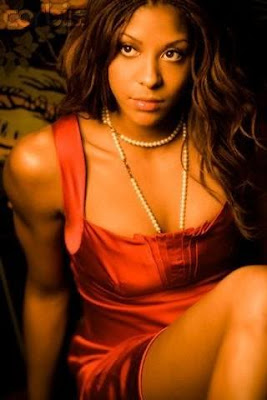 Regardless of what you think about WNBA,
you gotta admit that Candace Parker is pretty hot.
Because the way we develop our types is not clearly understood, it is plausible that the development of our types, as well as the application of our types in real-life situations, involve a racial element. It is plausible that when a non-Asian guy decides to hit on an Asian girl, a racial stereotype may have played some subconscious role (the extent to which is unknown) in that decision. Likewise, when an Asian girl decides to reciprocate on the attention and chats up the non-Asian guy, another racial stereotype may have played some subconscious role (again, to what extent, no one knows,) in that decision. In fact, given the abundance of racial stereotypes in our society and the relative abundance of a non-Asian man/Asian woman pairing (which is consistent with the stereotypes,) it is a fair guess they likely involve a racial element to some extent.

Now, the important part: there is nothing wrong with our subconscious playing this role, because we cannot control our subconscious. The problem begins when the racial element rises to the surface of our consciousness, is considered in a deliberate manner, and then is nonetheless employed in practice -- like Gina Choe, who explicitly rejected all Asian American men on a national television based on the stupid idea that Asians are short. (Puh-leeze. The Korean is 6' 1".) At that point, the racism should be considered blameworthy. But the Korean is certain that if we Asian Americans took a sober look at our experience, we will see that while the overt racists may exist in numbers enough to annoy us, they do not constitute a majority or even a significant minority.

Mind you, the Korean is not saying that subconscious racism is not a problem in general. It would be ideal if we could suppress our subconscious racism as well, because even subconscious racism eventually results in real discrimination. But at least in this context, the fact that racial stereotypes operate subconsciously is not a big problem. Whom to date and love is one of the most private decisions we can ever make. Overt racism in the dating context is misguided and ignorant, because it makes one treat one's partner as a projection of racial prejudice rather than as a real person. But racism that may or may not operate at the depth of our minds that we do not even realize, much less control? That's something else.

(As an aside, it's not even that difficult to see if the potential romantic partner is approaching you based on conscious racism, since -- as seen in above examples -- these people tend to reveal their racism rather quickly.)

In fact, much of the discussion about yellow fever does not amount to much more than frustrated ventings of Asian American young men who have trouble finding dates, trying to figure out why. If you fall into that group, allow the Korean to tell you right now -- it has less to do with race than you think. (The Korean's inbox is overflowing with emails from women asking how they might attract Korean guys!) Take it from the guy who just recently finished his dating career: in not-too-distant future, you will look back and laugh about how trivial these things were.

Got a question or a comment for the Korean? Email away at askakorean@gmail.com.
Posted by T.K. (Ask a Korean!) at 11:33 PM