Do you think Korean Americans should completely embrace this country and "become Americans"?

Yes. As Americans, there should be no question that Korean Americans must embrace America. Thanks for reading!

Alright, alright. That probably is not enough, because we need to figure out what it means to "completely embrace" America and "become Americans." K. Soje perhaps spotted this issue as well, since he put "become Americans" in quotes.

This is a difficult question, because the concept of "becoming American" is particularly elusive. The concept is elusive because for every criterion one can come up with, a plausible counter-argument can be made. Does holding the blue eagle passport make someone American, even though she longs for the destruction of America and will take steps toward her wishes? (For example like Faisal Shahzad, the failed Times Square bomber?) Does being born and raised in America make someone American, even though he defects and joins the enemy military? (For example, like John Walker Lindh?) Does sincerely pledging allegiance to American flag make one an American? (That would exclude American-born and American-raised Jehovah's Witnesses.) Does paying taxes to the American government make one an American? (But many non-American millionnaires pay more taxes to the American government than any average American would, and many poor Americans pay no taxes at all.) 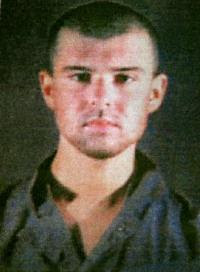 John Walker Lindh. If the Korean had his way,
his American citizenship would have been revoked.
Let's try stretching this inquiry to the maximum. Does one have to be white to be an American? There was a point in time when the answer to this question was yes. During World War II, more than a hundred thousand ethnic Japanese – majority of them American citizens – were rounded up into concentration camps. When Japanese Americans took to the court to vindicate the rights that were apparently given to them as American citizens under the United States Constituion, but the Supreme Court found a way to interpret the Constitution such that Japanese Americans would remain in detention.

Frankly, the question is far too daunting for the Korean to give a clear answer. It is more likely that the answer will shift over time. During World War II, American citizenship, having been born in America and speaking accentless English was not enough for Japanese Americans to be treated like Americans. But the insane race traitor bitch Michell Malkin aside, race-based internment of American citizens will not likely happen again because the concept of "American-ness" has evolved since the 1940s to be more color-blind.

But the Korean can identify one aspect by which Korean/Asian Americans fare very well. To do that, the Korean will give a story he heard recently from a former federal prosecutor.

This prosecutor was trying to put a band of human traffickers behind bars. These traffickers would recruit people from a poor region of China with a promise to get them to America for $40,000 per person. People who sign up pay half of the required money first. Then they are taken into the hull of a fishing ship, and sail for more than a month inside the boat without seeing daylight. Upon arrival, they are secretly taken into what amounts to a cage in New York Chinatown -- often right on top of or underneath the restaurants and shops that numerous tourists frequent. There, they would be locked up until their family sends the rest of the funds.

There were plenty of other charges that would stick with the traffickers, but the traffickers seemed like they were able to beat one of the charges -- kidnapping. In order to prove kidnapping, the prosecutor had to prove that the smuggled people were detained and moved against their will. And the prosecutor was having a hell of a time trying to prove that they were held against their will because truth is, everyone knew exactly what they were getting into. With the smuggled Chinese people on the witness stand, the defense attorney for the traffickers would fire questions after questions showing that yes, they knew they would be locked up in a hull of a ship without seeing daylight for a month. Yes, they knew they would then be locked up in a den until their family paid. Yes, they paid money to these traffickers even though they knew that they were walking into a situation where they would be certainly locked up in various places for a long period of time. Without coercion, there was no kidnapping.

The prosecutor was able to prevail by convincing the judge that to prove kidnapping, he only had to show that even if the smuggled people consented to being locked up, they could not get out even if they changed their minds. The traffickers were convicted of all charges made, and justice was served. But that is not the point on which the Korean wishes to focus here, for now. Instead, consider this -- even in an intimidating courtroom setting, even after describing the ordeals of being locked up in a ship then in a tiny room for more than a month, even with the prospect of exacting revenge to the traffickers who put them through that ordeal, the Chinese witnesses were unwavering: Yes, they voluntarily paid a huge sum of money to be locked up for at least a month, and indefinitely if their family did not pay, as long as they can come to America.

In some sense, this is the story of all Asian Americans. Yes, the Korean is aware that a few important distinctions exist. Most of us probably came to America via a more comfortable route than through an empty tank in a fishing boat. More importantly, most of us are present in America legally. But these distinctions should not obscure what makes Asian Americans particularly American -- for the most part, we either made a conscious choice to become American, or are born into people who made a conscious choice to become American.

This is important because choice goes to the core of America's existence. America began with people who chose to cross the ocean to a new land, to make a new life for themselves and their children. Everything that America stands for -- freedom, equality, pursuit of happiness -- originates from the burning desire to make life better and better for oneself and one's children, as well as the fearless adventurism that drove the future Americans to cross not only the literal ocean, but also the figurative ocean of linguistic and cultural differences. (Yes, the Korean is fully aware that Native Americans and African Americans got a raw deal out of that. But eventually and on balance, what America stands for made the lives of Native Americans and African Americans better, however belatedly.)

Therein lies the genius of America. America constantly renews itself with immigrants, as each wave of new immigrants to America carries the same flame that the Founding Fathers and the first generation of Americans carried. As the newest generation of Americans, Asian Americans may be temporally farthest away from the first Americans. But because Asian Americans can vividly recall and describe their or their parents' desire to make a new life for themselves, they share the closest spiritual connection to the first Americans.

What could be more American than that?

Got a question or a comment for the Korean? Email away at askakorean@gmail.com.
Posted by T.K. (Ask a Korean!) at 9:18 PM