You're not a Man until You Survived Military

Why is it that every time I see a Korean at the rifle range he has at least one assault rifle? Is there some sort of rule that if a Korean owns a gun it has to be an AK-47?

The Korean is one of those people who think the 2nd Amendment became obsolete when the U.S. government began to own tanks and fighter jets. So naturally the Korean does not have much experience in guns; the Korean fired a gun only in one occasion, at the LAPD Police Academy. But that's another story.

Here's a guess: (almost) all Korean men have been through the military, and that experience makes them more familiar with assault rifles rather than puny handguns.

You cannot talk about how Korean men are without talking about their military experience. Currently, standard length of the military draft in Korea is 2 years and 4 months. If one is assigned at a non-combat position (i.e. JAG officer, medics, secretarial duties, etc.,) the length is 3 years. I can try to explain what the usual military experience entails, but I'll let the following picture do the talking. 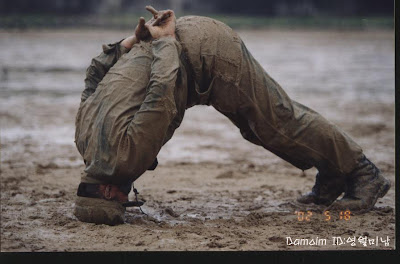 I'm sure you get the idea. (That pose is called Wonsan pok-gyok, which translates to "bombing of Wonsan." Wonsan is a port city in North Korea. This punishment is applied liberally for various causes, such as being slow in marching, losing a soccer game, or overcooking sarge's ramen.)

Having been through this experience for more than 2 years, post-military Korean men become completely insufferable. Imagine your most insufferable Red Sox fan (pre-World Series win) bitching about his misery and multiply by 100, that's your typical Korean man. I have had the worst experience! My ssibal ("fucking") sarge made me eat food out of a trash can! I ran 10 miles a day wearing full gear every day! Of course, attendant to the horror stories are their own stories of heroics. I may be out of shape now, but I was fucking fast when I was in the military. I was the striker for our platoon soccer team, and I once caught a wild boar with my bare hands! Put some Korean men together with some booze, and goondae ("military") will be ALL they will talk about. (All the stories above are the real ones that the Korean heard with his own ears.)

Do you have a good goondae story? The Korean would absolutely love to hear it. If you send in a good one, it will be posted.

Got a question or comment for the Korean? Ask away at askakorean@hotmail.com.