Ask a Korean! News will be different from any Korean news you can get from the U.S. It will pick up some news that Korean newspapers reported that the Korean thinks to be significant. Here is the first of the series. 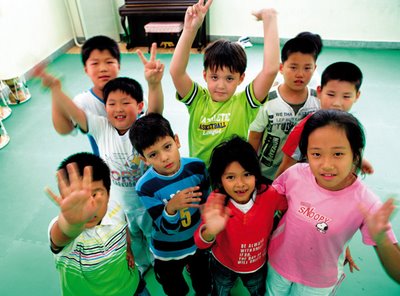 I know all Asians look alike. They kinda do. But surely the most ignorant reader of this thing can probably tell the difference between East Asians (Korean, Japanese, Chinese), Southeast Asians (Vietnamese, Thai, Filipino) and South Asians (Indian, Pakistani, Bangladeshi). With that in mind, check the above picture of adorable Korean children.

"Wait, what?! Those three in the middle are clearly not Korean at all! Do you mock my Asian-differentiating skills, the Korean?" would be the reaction of... (surprise) Koreans who live in Korea. And there begins this discussion.

Korea has always been a homogeneous country, and race relation was never much of a problem since, well, you need two races to fight each other. (Not to say Koreans were a peaceful lot. Oh no. They fought amongst themselves for other stupid reasons, like being from the eastern regions versus the western ones. But that's for another day.) A few times when Korea ever had foreign races on the peninsula, those foreign races usually tried to take over the country. Hence Korean people have a strong xenophobic streak.

Fast forward to early 1990s. Korea is now fully industrialized, and has been pretty well off for quite some time. Most people have migrated to the city for jobs and excitement, and the rural areas have become emptier and emptier until only old people, their first born sons, and cattle are left. The firstborns can't leave the family farm, so they're stuck. Problem is, they gotta get married and continue the family line. But no Korean women in their right minds would stick around the farms. So what to do?

Enter: the time-honored tradition of mail-order brides! Fine ladies from modest backgrounds in Vietnam, Philippines, and Thailand, for about $2,000, are shipped out to Korea for the sole purpose of marrying these dudes, having fed the bullshit that farmers are among the highest-earning, most respected professions in Korea. More and more came each year until one-third of all married men in the rural area are married to a foreign-born woman, according to a recent report. Amazing, isn't it?

(True story: when traveling around rural parts of Korea, the Korean saw advertisement that proclaimed "You don't have to pay until you're satisfied!" So if the mail-orderer was not satisfied, he can ship the lady back! I wonder if it's like a computer software, where you can't return it anymore if you took off the shrinkwrap. Okay, that's just disgusting. Let's move on.)

The fuckedupness of this situation has many levels. Domestic violence is a big problem, and so is unilateral divorce or abandonment. Still another is what to do with the "Kosian" children. (Korean + Asian, the terms Koreans use nowadays, as if Koreans are not Asian!) Since the phenomenon of mail-order bride began about 15 years ago, there are now enough interracial children to make up as much as half of the children going to school.

I don't want even to imagine what these children would go through as they grow up. As bad as race relations is in America, it still is the best in the world. Unless Koreans do something to radically change their attitude toward foreignors and interracial people (unlikely), wide-scale race riots a la Los Angeles or Paris in about 20 years is a virtual certainty.